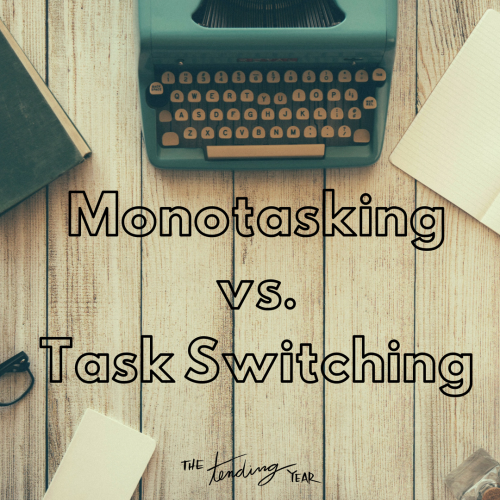 Before we jump into the blog post, I want to quickly let you know that I’m currently accepting new one-on-one coaching clients who want a little extra guidance with changing their productivity habits. You can read more about my coaching practice here and book a session here. You can also download a FREE guide to habit formation and maintenance by subscribing to The Tending Letter in the pink box below this post. Thanks for your time, and enjoy the blog post!

My focus for July is Intention.

I’ve been practicing new habits and perspectives so I can bolster intentions that align with my values. One of those values is my fascination with productivity. I love researching it, practicing it, and blogging about it, but sometimes I push myself a little too hard in the pursuit of productivity. If I am juggling too many tasks at once, even the fun tasks can feel like an imposition. When this happens, I experience blowback in the form of stress and overwhelm.

In my effort to broaden my productivity toolbox in a healthy and intentional way, I dedicated last week to researching and practicing monotasking.

Before we talk about monotasking, let’s get one thing straight about its more widely known alternative: multitasking.

When think we are multitasking, we are actually task switching.

According to Chris Bailey of A Life of Productivity, “It’s impossible for our brains to focus on two tasks at once—it’s actually rapidly switching between them. Instead of channeling our complete focus and energy into one task, we spread it thin, which prevents us from diving deep into any one of our tasks.” When we think we are multitasking, we are repeatedly pulling our focus away from not only one task, but two of them!

You might be thinking, “But I’m great at multitasking!” And if you are part of the 2.5% of the population who are “Supertaskers”—people who can efficiently and rapidly switch between two tasks—you may be right. But, in general, our brains are simply not wired to task switch.

Verena von Pfetten writes in her wittily titled New York Times article, “Read This Story Without Distraction (Can You?)” that “[a]s much as people would like to believe otherwise, humans have finite neural resources that are depleted every time we switch between tasks….” So, if our attempts to task switch are actually distracting and depleting us, why do we still pursue it?

Tim Elcore answers our question in “The Unintended Consequences of Multi-Tasking”: crossing things off of our to do list when we are task switching releases dopamine into our systems. Because of this, “[w]e tend to pursue more short-term tasks that give us this dopamine shot, and soon we’re caught up in quantity over quality. We actually work harder, not smarter. And we don’t really focus. We assume we’re doing more and better, but in reality we trade in value for speed and volume.”

This weakened quality of output is particularly interesting, as most of my research on monotasking brought up the example of job applicants listing “multitasking” as a quality or skill on their resumes and in interviews.

Although we might really want those checkmarks (and dopamine), task switching can have negative affects beyond our work output. According to Drs. Cynthia Kubu and Andre Machado, “our tendency to divide our attention, rather than focus, is hampering our ability to perform even simple tasks,” such as attentiveness, learning, and mindfulness. Similarly, multitasking can increase chronic stress, social anxiety, and depression.

Yikes. So How Do I Monotask?

I know it sounds easier than it feels, but in order to monotask you need only do one thing:

Focus your attention on just ONE task at a time.

Thankfully, there are a number of suggestions out there on how we can begin building monotasking habits. Most of them come from the field of business, such as these two from  Herbert Lui’s “Why successful people work on one thing at a time”:

However, some can be adapted for tasks outside of work, such as these two from  Julia Naughton’s “Nine Ways To Single Task Because Really, It’s What Your Brain Craves”:

The important thing to remember when starting a monotasking practice is to start small.

Some people like to go H.A.M. with new practices. If that’s you, go for it, but I’d suggest picking just one thing to monotask. Although I myself haven’t done it yet, I think that the Note to Self podcast’s “infomagical” project sounds like an amazing place to start. They identify one challenge each day for five days, with interesting assignments such as “Write a sentence articulating your personal rule/algorithm/filter parameters/mantra to live by. Consider this your note to self.”

Interested in trying out monotasking? Check out these three exercises!

Like all personal development practices, you should adapt your monotasking practice to fit your own lifestyle, needs, and values. For example, you might not be able to focus on a task while listening to music… or you may focus better if you’re listening to music. I fall into both camps depending on the music and the task at hand.

You might be better at monotasking in the morning or in the evening. You might struggle to monotask if you are feeling anxious, whereas someone else may lean into monotasking as a way to cope with ovewhelm. What I’m trying to say here is:

do not compare your own monotasking practices to others! Some people can more easily monotask due to their access to silence, uninterrupted time, or other privileges, and this does not meant that one way is better than another.

The biggest task switching culprit for me is technology. I’m much more likely to monotask if I write with a pen and notebook and read printed materials. If I have to use technology, I monotask better with the use of an internet blocker like Freedom and by putting my phone on silent.

Before you start a monotasking session, check in with yourself about which tools will distract you from focusing on one task. If you need your laptop, can you use a tool like Pomodoro or a 90-Minute Session to plan in breaks when you will allow yourself to check email and texts (or better yet, rest your body and drink some water)?

Be Creative With Your Monotasking

I committed to monotasking my perspective one day last week by using gratitude as a theme. I had been experiencing some higher pain days, so I wanted to experiment with focusing my emotions on something positive. When I started to feel nervous or stressed, I reminded myself to check in with what I was grateful for: the sunlight on my face, being in love, how cute my dog is and how people smile at her when we walk by, etc. While this didn’t completely prevent me from feeling sad when my pain spiked later that day, it did help me to remember that I could control my perspective even if I could not control my pain. Ultimately, it was easier for me to relax and get out of black and white thinking.

If you’re interested in this, try picking a theme or mantra to repeat to yourself throughout just one day to help “monotask” your perspective by aligning it on one track. Be creative!

*Please note that the original version of this blog post was published here.

This blog is not affiliated with, associated with, or endorsed by the Pomodoro Technique® or Francesco Cirillo.

Don’t forget to subscribe to my twice a month newsletter below to get your FREE guide to habit formation and maintenance! You can read more about my coaching practice here and book a session here.

Subscribe here and you'll receive a FREE digital copy of my habit formation guide, To Hold in the Hand: A Guide to Maintaining, plus extra productivity and self development tips in my newsletter, The Tending Letter!